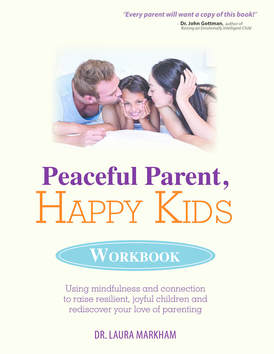 Peaceful parenting doesn’t mean you’re peaceful all the time. A full human life constantly stimulates emotions, some of which are the opposite of peaceful. Peaceful parenting simply means that you commit to managing your own emotions, so you aren’t taking them out on your child. You monitor your mental and emotional state, and take care of yourself, so that you can maintain a sense of well-being most of the time. When you get triggered, you notice it and take proactive steps to calm yourself so you can respond to the situation with maturity. Psychologists call this “emotional intelligence.” But you could simply think of it as role modeling how to be a responsible grown-up, even when your child is acting like a child.

Children can be expected to act childish, so we need to train ourselves not to take their behavior personally. They aren’t trying to create a problem for us; they’re just acting from their own unmet needs and tangled emotions. In fact, their misbehavior signals that they’re having a problem and need our help.

Aspiring to become more peaceful doesn’t mean that you’ll never get angry. It simply means that you take responsibility to work through your anger, rather than taking it out on your child. You’ll still have to intervene to guide your child appropriately, but that guidance will be in your child’s best interests, rather than a way for you to blow off steam.

Many parents say that anger just hijacks them and, before they know it, they’re having their own tantrum. But every time you’re able to interrupt your own tirade, to notice yourself getting upset—but resist taking action - you’re building new neural pathways. Soon, your prefrontal cortex (the rational part of your brain) will automatically send a calming message to your amygdala (the alarm system of your brain) that says, “When this child gets defiant, it seems like an emergency, but it really isn’t.” Over time, you’ll notice that you’re calmer, less reactive.

I want to stress that I’m not suggesting that you should ignore your feelings when you start to get angry. If you say, “I shouldn’t feel angry,” and just push your anger out of your awareness, then you’re trying to repress your anger. Repressed emotions don’t go away. They’re forced out of our conscious awareness, but we still carry them in our bodies. We’re still lugging them around with us, and they’re always knocking on the door of our consciousness saying, “Hey, pay attention to me!” Sooner or later those angry feelings are going to pop out uncontrolled by our conscious mind, and then we explode.

But what if you’re really good at keeping those angry feelings stuffed? That’s even worse, because repressed anger just stays in your body and makes you depressed or physically ill.

What I’m encouraging you to do is actually much harder than stuffing your feelings. I’m suggesting that you notice your anger and other emotions but that you resist acting on them. Noticing your experience without leaping to action is called “mindfulness.”

Mindfulness helps you defuse your own tantrums before they even start. You might find yourself saying, “When my child is defiant and says, ‘I hate you, Mommy!’ it makes me crazy - it makes my blood boil.” If you can just notice that, then you already have the ability not to get hijacked into reactivity, because you’re now in observer mode. Observer mode gives you a choice about how to react.

Anger is always a message that something is wrong, that something needs changing - either something outside us or (more often than we’d like to admit) something inside us. So we do need to listen to our anger, not just ignore it. But, when we’re angry, we often interpret the anger as meaning that we should attack the messenger. If we consider the message after we’ve calmed down, we usually realize that the source of our rage was our exhaustion, or our fear, or feeling powerless. There is something we need to change in our life. But it might not be our child. And, even if it is, we can’t control another human being, so we can’t directly change our child. If we crack down with punishment, our child will change - but in ways that will almost certainly backfire. Instead, peaceful parents consider which needs and emotions are
driving their child’s behavior, and how to address those in order to change the behavior. Changing the environment - and ourselves - will always produce change in our child.

Every one of us will lose it if we’re pushed to the edge, no matter how peaceful we try to be. So aspiring to parent more peacefully won’t make you perfect. It will just help you remember that, as the grown-up, it’s always your responsibility to stay away from the edge.