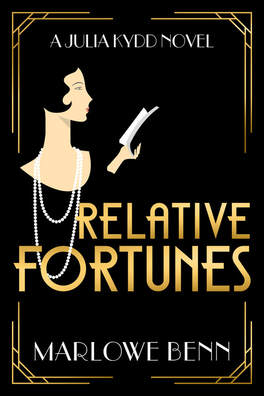 Two days later Julia stood beneath an ornate iron arch over the drive to the Rankin residence, Glennis’s note tucked into her handbag. Its fragrance of violets had overwhelmed Philip’s vestibule yesterday as it waited for Julia to return from the Pryor, where the new Matisse watercolors were, she begrudgingly agreed, quite wonderful. In a large looping hand, Glennis had begged Julia to come to a memorial service for her sister. It’s beastly, she scrawled. They can’t wait to bury her, as if they’re glad she’s dead!! You must come and help me bear it!! Julia silently forgave the several exclamation points, fat as teardrops.

She strolled through an alley of crimson maples, their leaves beginning to smolder, and wondered again at the Rankins’ strange haste. From what she’d gathered Friday evening, Naomi’s death was at least untimely. She couldn’t have been very old and apparently hadn’t been ill enough to notice. Wouldn’t they need time to accept the shock, perhaps grapple with its mystery? They did seem in an undue hurry to usher her along to her grave. Hardly the actions of a loving family, Julia thought. But then what would Philip do at news of her death? Or she at his, to be honest. As one who knew precious little about loving families, Julia was hardly one to judge the Rankins.

The drive turned, ending any suggestion of a pleasant garden. The house stood ponderous and angular, stone blocks the size of iceboxes piled three stories high in regimental symmetry. The old estate sloped away toward the East River and its willow-clogged bank. A battalion of rosebushes, blooms faded to cankered hips, marched beside the two paved tracks that led to the white-columned porte cochere.

She passed four parked motorcars. A driver’s head jerked upright as her steps startled the gravel beside his door. Calmed by her unfamiliar face, he resettled back into the upholstery, arms folded and cap tipped over his eyes. She proceeded up the five wide steps and rang the bell.

A housemaid pulled open the heavy door carved with Celtic knot work, but before she could speak Glennis bounded into view, her wide face suffused with the distress of a child whose nanny has strayed from sight. She pulled Julia across the hall, their shoes clattering on the waxed parquet, and into a small room that seemed to be some sort of butler’s pantry. She elbowed the door shut behind them. “Oh, Julia, they’re sweeping her away like yesterday’s rubbish. It’s ghastly. I’m the only one who even cares she’s dead.”

Julia found the handkerchief tucked into Glennis’s sleeve and dabbed at her friend’s wet cheeks, careful to dislodge as little powder as possible. “People mourn in different ways, Glennis. There’s more to grief than tears, you know. I’m sure they care.” The platitudes rolled out in smooth succession. Though predictable and perhaps mistaken, they were what one said.

Glennis frowned. “No, something’s peculiar. They won’t tell me what happened. Or even where they took her. I’m worried half to pieces, and they think I’m balmy.”

“I’m sure there’s nothing to worry about, Glennis. She was probably ill without anyone realizing it. I’ve heard of cases like this, when someone seems ne until the very end. Maybe it was a blessing, a sign that she didn’t suffer much.” Julia cringed at her further descent into clichés, but what else could she say?

Glennis gave a skeptical pout and patted at the back of her head. “Am I an awful fright?” Her hair was mussed, but otherwise she looked about as usual: plump, a little confused, and considerably younger than her twenty-five years. Julia shook her head not at all and gave Glennis’s cheeks a brisk rub with her thumb.

“Come on then. They’re waiting. They don’t know you’re coming, and they won’t like it, but so what?”

Before Julia could consider this ominous news - was she about to intrude uninvited upon a private a air? - Glennis tugged her across the hall.

The drawing room fell silent when they entered. Julia blanched: her fear was confirmed. It was a very small, very private gathering, and she was not only unexpected but unwelcome. A handful of somber people eyed her from chairs pulled into a loose oval in the center of the room. There was no coffin and none of the usual signs of mourning, no black buntings, no dark veils. A priest stood to one side, hands folded over a service book. In the awful quiet a middle-aged man with a horseshoe of graying hair stepped forward. His face seemed to not quite meet in the middle, leaving a flat stripe of bone between his eyes and a gap between two front teeth wide as spatulas. That and eyes the color of shallow water identified him as Glennis’s brother, Chester.

“Everyone, this is my particular friend, Julia Kydd,” Glennis announced. “You all have each other, so I asked Julia to come. Because I need her.” Her nervous voice blared, and she clutched Julia’s arm against her ribs, as if she expected her guest to be wrestled out of the room. Julia had a sudden notion of how strikers and suffragists must feel when facing down policemen.

Chester Rankin exchanged a long look with one of the seated women, a brunette with a stiff mass of marcelled hair, thin penciled brows, and shoulders so tense they raised faint welts in the black wool jersey of her dress. The woman considered Julia with red-rimmed eyes wide with disapproval at this glaring breach of decorum. Julia wanted nothing more than to apologize - she hadn’t realized! - and creep away, but Glennis’s grip and a fear of making things worse froze her in place. The woman seemed to reach the same conclusion: best to avoid a scene.

She dropped her chin and folded her hands in her lap, signaling reluctant forbearance. Glennis gave Julia a gleeful hug before her brother scowled and gestured for another chair to be positioned behind the circle. He motioned Julia toward it and steered Glennis to sit beside him.

The service was brief and formal. As the priest intoned the sonorous language of the Book of Common Prayer, Glennis worked her handkerchief, but the only sound of weeping came from a gaunt, plain woman sitting, like Julia, apart from the others in a straight-backed chair. Two graying braids circled her head, and a strand of imitation pearls skimmed the collar of a brown wool dress at least five years out of date. Julia guessed she was the family’s old nanny, fetched from an obscure Brooklyn boardinghouse.

The formal liturgy ended, and the priest closed his book. “Dr. Winterjay?”

A younger man rose from beside Glennis’s sister Vivian with a sad smile that suggested he understood the ways of the world but loved it anyway. He looked to be a professional man of some sort, perhaps a promising scholar or judge, the kind of man whose easy manner and handsome face encouraged trust and caused young girls to giggle. Something about his earnest yet worldly smile also made Dr. Winterjay look, eerily, a bit like Julia’s beau back in London. David too could both admire and tease in the same glance, inviting one into the intimate game that was modern gallantry.

“Ahhh.” Winterjay expelled a long and meaningful syllable. “Naomi.” His wife’s pale blue eyes - clearly the family’s distinguishing feature - filled with tears at the sound of her sister’s name. “Naomi was not an easy sister to love.”

Julia blinked but kept her head still. Had he misspoken? Surely the not was a slip. She sneaked a glance at Mrs. Winterjay, expecting to see her eyes widen in a wifely signal of the gaffe. But she merely gazed at her husband with a leaden expression.

“Naomi was - ” Again he paused. “Naomi was a difficult woman. She chose a life of turbulence and discord, and we have all been buffeted by the powerful storms into which she sailed. We have all suffered on her behalf, sensitive to the stings and humiliations which Naomi herself scorned. None of us was spared the acid of her tongue or the harsh judgments she delivered upon those she found wanting.”

Julia fought to keep from squirming at this litany of misdeeds, hardly the usual talk of funerals. Was anything too awful not to be forgiven, or at least overlooked, on such occasions? Even the worst villain’s faults could be veiled in euphemism and blandishments. She hazarded another furtive survey of the room, baffled by the docile quiet of the other listeners. Why were there no coughs, no jiggling feet, no whitened knuckles of suppressed alarm? Every face was lowered, every jaw rigid. Each man sat with arms tightly folded. Clearly this harsh assessment came as no surprise, but was it shared or merely endured?

What on earth had Naomi Rankin done to warrant such reproof?