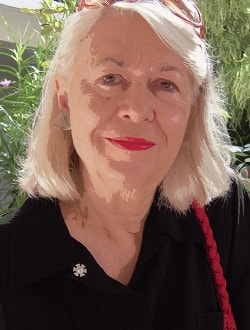 SANDRA has been immersed in the arts all of her life, as a theater actress, playwright, painter, photographer, book reviewer, editor and art critic. She was born in Bakersfield, California and has been residing in New York City for over three decades.

In theater, her accomplishments are numerous. Her plays include Manikin, The Transformation of Aura Ruanes, Days and Nights of an Ice Cream Princess, The Sentry and the Laughing Ladies and many others. Her plays for television include Chameleon and Coming Attraction. She has been an O’Neill Playwright Conference finalist and her plays have been performed Off-Off Broadway at the Courtyard Playhouse, The Viridian and elsewhere.

Sandra’s artwork has been selected for solo and group exhibitions in Connecticut and New York. Recently, her portrait painting of Louise Nevelson was exhibited at the acclaimed Woodstock Artists Association and Museum (WAAM). She was elected to membership in the National Association of Women Artists (NAWA) in 2014, the oldest women’s fine art association in the U.S., for which she is Public Relations Co-Coordinator and has participated in several of the organization’s anniversary exhibitions in New York. She is also a proud member of the Art Students League of New York.

Sandra is Chief Art Critic for Highbrow Magazine and a contributing writer for GALO Magazine. She is co-editor of NAWA NOW quarterly magazine (published by the National Association of Women Artists, Inc.) and culture and travel editor for Sanctuary.

Statement: There’s as much wonder to be had in a cat’s brief and unexpected pose as spotting a woman’s yellow sunhat in old San Juan. Thank you for making me a part of Sanctuary. I know it will be a great journey!
Sandra's Website
Team Talk Interview