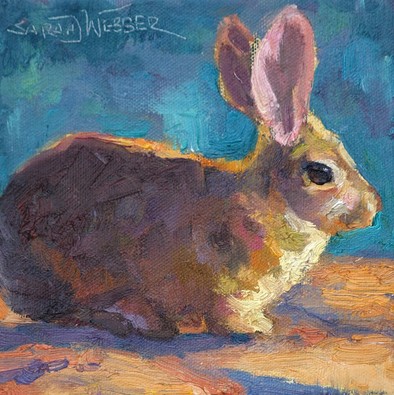 Holding Still
Oil on Canvas
© Sarah Webber
Sarah J. Webber grew up in St. Paul, MN in an artistic family. She graduated from the University of Minnesota in 1987 with a fine arts degree in vocal performance and a minor in art history. When she relocated to Jackson Hole, WY, she became interested in oil painting after meeting some of the local artists, including Bill Freeman, a palette knife painter and mentor.

In the 1990’s, she relocated to Scottsdale, AZ and furthered her art studies at Scottsdale Artist School. In 2001, after spending nearly ten years working in art galleries, she began to explore the idea of painting full time. She started painting small studies of local barnyard animals and wildlife, and her work was placed in a local gallery. Sarah began to be represented by prominent galleries, and her work was recognized by Stuart Johnson, Settlers West Galleries in Tucson, the Mountain Oyster Club and Southwest Art Magazine.
More recently, Sarah's work has appeared in many top exhibits and museum shows, including Western Visions (Jackson, WY), Art of the Animal Kingdom (Bennington, VT), Southeastern Wildlife Exposition (Charleston, SC), Weekend in the West (Evergreen, CO), Cowgirl Up! Exhibition at The Desert Caballeros Museum (Wickenburg, AZ) and the Clymer Museum in Ellensburg, WA, which hosted a major exhibition of her work in 2009. Her work consistently appears in the Settlers West Galleries American Miniatures Exhibition (Tucson, AZ), The Legacy Gallery Holiday Show (Scottsdale, AZ) and the Mountain Oyster Club (Tucson, AZ), where she is part of their permanent collection. She has participated in over 15 Quick Draws throughout the west, including the Jackson Hole Falls Arts Festival.

Sarah is a signature member of American Women Artists and an associate member of the American Impressionist Society. Sarah also actively conducts workshops throughout the U.S. When she’s not painting animals, she likes to paint plein air and florals. She currently resides in Tucson, AZ.