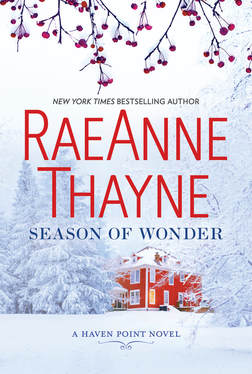 Ruben was in deep, deep trouble.

He was fiercely attracted to his neighbor. Something about Dani’s complicated mix of vulnerability and chin-up defiance struck a chord deep inside, some place no one else had ever touched.

He didn’t want to be attracted to her. She wasn’t at all his type. He had always believed he preferred soft, sweet, gentle women—someone like Andie, someone giving and kind, not prickly and defensive.

He might tell himself that all day but it didn’t change the fact that he found himself in this unlikely position where he couldn’t stop thinking about her, dreaming about her, wondering about her.

What difference did that make? He asked himself as he finished gathering the supplies they would need to clean up his boat and waited for them to arrive. Yeah, he was attracted to her, in a way he couldn’t remember being to another woman, but that didn’t mean he had to do anything about it.

They would be spending most of the day cleaning up graffiti. That’s all. He only had to survive several hours in her company without making a fool of himself over her.

Maybe by the end of the day they would emerge as friends. Something told him Dani Capelli needed all the friends she could find.

As usual, his dogs were the first to inform him he had visitors. Ollie went on alert, his ears cocked for just a moment before he rocketed to the front door, Yukon close behind him.

They made it there about fifteen seconds before the doorbell rang.

Friends, he reminded himself. That didn’t stop his heartbeat from kicking up a notch as he opened the door.

“Hi police man,” Mia said, greeting him with her shy smile that stole his heart every time.

The other two females at his door didn’t look nearly as happy to see him as the little girl was, but Ruben decided not to take it personally.

“You guys ready to do this?”

“I know we talked about starting with my boat, but this morning I was thinking we should start with the others while the weather is good and then make our way back here. Mine can wait, if we have to, plus I have the covered boathouse to protect from the elements a little. Does that work for you guys?”

“Whatever you think. Isn’t that right, Silver?”

Her daughter looked like she would rather be anywhere else on earth. “Fine,” she mumbled.

“Where do you want to go first?” Dani asked.

“Let’s start at the Millers’ house. The graffiti seems a little darker there and might take two coats of paint to cover. I talked to Mary this morning and she was able to find matching paint cans from when they had it re-painted two years ago, so that should make things easier. I’ve got some painting supplies from when we redid this place. Rollers and paintbrushes here and a couple of trays.”

“And I found a few things at our place, too.” She gestured to a box at her feet.

“Great. We should be good, then. Silver, why don’t you help me with this crate while I grab a few other things.”

“Yeah. I think you can handle it.”

He handed her the heavier of the two boxes, not out of spite but to again reinforce the message that her actions had consequences.

He picked up the other box, gave his usual orders to the dogs to behave, then closed the door behind him.

“You’re not taking your dogs?” Mia asked. “They’re cute. Maybe they can help us.”

“Not today. I’m afraid they would mostly get in the way while we’re trying to work. We kind of have to hurry to get two coats of paint on while the sun is shining.”

“It is a beautiful day,” Dani said. “One of the nicest we’ve had in weeks.”

She was right, the weather was unseasonably warm for December, predicted to get into the high 50s, with no snow on the forecast for at least a few days. The morning sun felt almost warm on his shoulders.

“I’m glad. If it wasn’t so nice, we might have to wait until spring to repaint. As it is, we might have to use some industrial space heaters so the paint will dry. We’ll see how things go. I’ve got a couple buddies in construction who might be able to loan us some equipment for a few days.”

Dani gave him a look he couldn’t read, as if she couldn’t quite figure him out. “You’re going to a great deal of effort on Silver’s behalf. I’m still not sure why.”

He glanced at the girl, who walked with her head down as they made their way down the street toward the Millers’ house.

“I don’t know,” he admitted, which was absolutely the truth. “I guess maybe this is one little way I can give back to repay all those who’ve helped me throughout my life. Besides that, around here, neighbors help each other. It’s what we do.”