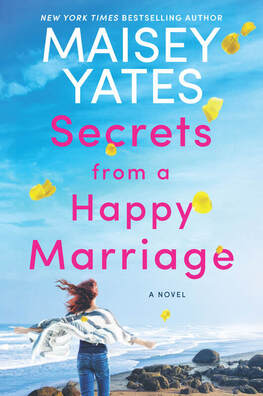 Anna thought that her face might break. She had been smil­ing for the past two hours. Standing on this damp grass, her shoes sinking into the muck, the mist clinging to her hair and her grief clinging to her body like another skin.

And over it all, she wore that pastor’s-wife coat.

“They need reassurance,” Thomas had said right before they had walked in. And the way that he looked at her - stone-faced enough that she thought he might finally have noticed the distance between them.

She couldn’t remember the last time he’d touched her.

Even when they’d walked into the funeral, they had done so side by side, with a healthy amount of space between them.

But the loss of her sister’s husband had her thinking about marriage. And even more, about Jacob himself.

She did, and she wasn’t even sick. And it felt like an insult to his memory.

“Thank you for coming,” she said to two of the guests who were getting ready to leave.

“Thank you,” she said to someone else, who looked at her tearfully.

It kept on like that for the next hour. Greetings and good­byes, platitudes. She could think about entirely different things, stand there and smile, and say everything she was supposed to.

And her soul was bursting to escape.

She looked over at her mother, who looked like she’d aged years overnight. Which was something that Wendy McDon­ald would definitely not appreciate if anyone breathed a word of such a thing in her direction. Wendy looked over at Anna, and there was something far too perceptive in her mother’s gaze, even through the haze of grief.

She had often thought, if she had to choose an era of the lighthouse that had the most relatable history to her, it would be the time it had played host to seventy American soldiers. Because she often felt like up here on the hill, she was keeping her head down and keeping up a brave front, while in reality, she always felt like she was about to be buffeted on all sides.

But, particularly as a teenager, the drama had suited her.

“Thank you so much,” she said.

“Can I do something for you, Anna?”

Anna jolted. She realized that she knew the woman that she was talking to more than just in passing. They went to several Bible studies together at church. Laura. Who was al­ways friendly, and always seemed like she might want to spend more time with Anna, but Anna had been spending less time at church things and more time at the Lighthouse Inn.

“No,” Anna said. “I don’t need anything. Rachel… I’m just concerned about her.”

The lie tasted bitter on her tongue. But she lied a lot now. By omission. Without words. With a smile.

“Thank you for asking.”

“If you ever want to go to coffee…”

“Sure,” Anna said, not meaning it. “I’d love that. I’ll… We’ll talk. When everything settles down.”

She had an overwhelming revelation - Anna realized that things would settle down again. That everything would go back to the way it was, just with a hole where Jacob used to be.

This event, no matter how shocking, difficult and intense, had not changed her life.

She was still the same woman in the same marriage. The same woman, trapped because whatever she felt in her heart, she had restricted herself so tightly she couldn’t quite find a way to make the moves that needed to be made.

It was only at the Lighthouse Inn, where she had been a girl, where she had run wild and barefoot through the lawn, that she was able to find that spark in herself still.

She looked toward the Captain’s House, and something new sparked inside her. Not habit. Not familiarity.

She was not ill. She didn’t have an excuse. The only person who was keeping her trapped was herself.

And she thought it might be time to make a move.