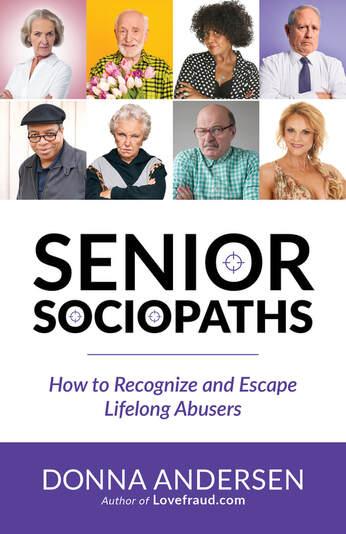 No one really knows how many people have antisocial, narcissistic, borderline or histrionic personality disorders, or psychopathy. Estimates in two well-known studies range from 5.5% to 17.5% of the population, which average to approximately 12%. No drugs or therapy have been proven to cure these disorders. Still, there’s a general perception in mental health circles that sociopaths “burn out” as they get older. In fact, the concept is found in psychiatry textbooks. For example:

“Although the disorder is chronic, most sociopaths burn out by their mid-40s. Although the sociopathic view of the world persists, the actual frequency of antisocial acts falls. Eventually, some sociopaths become delightful raconteurs; others drift into a misery of self-pity and hypochondriacal concerns.”

The Little Black Book of Psychiatry, by David P. Moore, 2005

This idea made no sense to me. My ex-husband was in his late 50s while scamming me and others. I’ve also heard from hundreds of men and women who told me about sociopaths who continued to engage in antisocial behavior long after their 40s.

So, do sociopaths actually “burn out” as they get to middle and old age?

To gather data, I asked Lovefraud readers to complete an online survey. The objective was to collect information about antisocial behavior exhibited by people who were age 50 and older. I chose the age of 50 because if mental health professionals were correct and these disorders started abating at 40, by age 50 most sociopaths should be exhibiting far less disordered behavior. Did they? Or did they continue their antisocial behavior as they got older? Where they, in fact, “senior sociopaths?”

The Lovefraud Senior Sociopath Survey was posted on Survey Monkey from September 2016 through May 2017. Respondents were asked to answer 92 questions in reference to a particular individual who was a romantic partner, parent, family member, work colleague, neighbor or acquaintance. A total of 2,120 people responded. Throughout this book, I refer to the person that the survey respondents described as the “index individual.”

Forty percent of the survey respondents — 826 people — said they knew the index individual both before age 50 and after age 50. They were asked if the sociopaths burned out with age, and the answer was a resounding “no!” The exact question and responses are below:

Add up the numbers and 91% of survey respondents who answered the question stated that the sociopath’s behavior was just as bad — or worse — after age 50. Here are some of their comments:

• He had perfected his sociopathic skills. He was much worse than 30 years earlier. Tried to kill me by choking, throwing on floor, kicking, attempted poisoning. Threatened to kill my grandchildren.
• As time went by, she became more irresponsible with money, more lying, constant infidelity, ignoring the children even more, more grandiose, and more hostile and abusive.
• He became more cruel and heartless with time. It was almost like he enjoyed causing me and others pain!

This book is a comprehensive look at deception, manipulation and antisocial behavior perpetrated by people over age 50. It includes hundreds of quotes and stories from Lovefraud Senior Sociopath Survey respondents. To protect their identities when I reproduced their comments, I have given them fictitious names, which appear with an asterisk (*) the first time I use the name in text.

People from all over the world completed the survey, so sometimes you’ll see spelling used in the United Kingdom. I also retained the respondents’ words as much as possible, so some comments include imperfect grammar and punctuation. In my view, what is important is how they described their experiences.

A warning — you need to be careful

In this book, you will read many cautionary tales. My goal is to warn you that physical maturity does not mean an individual is responsible, reliable or safe. You always need to be careful about whom you allow into your life.

As of 2019, there were nearly 115 million people over the age of 50 in the United States. If 12% of them have an exploitative personality disorder, then you are living among 14 million senior sociopaths. You need to know the warning signs.

If you are already dealing with senior sociopaths, I want you to understand that there is no point waiting for them to grow up, settle down and become normal, because they won’t. Please consider the information in this book as you decide how to move forward. To continue hoping, waiting and praying for change is a waste of your life.

So what do you do? In a separate survey that garnered 257 responses, I asked exactly that question. At the end of this book, I share the strategies, tactics and advice of people who have been where you are. The top advice is cut the person out of your life and have no further contact, and then work on your own recovery.

Sociopaths exist. They blend right into our society. And they continue their abusive behavior until the day they die.
Q & A with Donna
How did you learn about senior sociopaths?

I first learned about senior sociopaths the hard way – by marrying one. My ex-husband was 55 years old when I met him, although he lied about his age. This man took $227,000 from me, cheated with at least six women during our 2 ½-year relationship, had a child with one of the women, and then, ten days after I left him, married the mother of the child. It was the second time he committed bigamy. He was almost 60 years old when I divorced him, and he was still looking for women to swindle.

What evidence do you have that sociopaths keep abusing as they get older?

I conducted two surveys specifically about behaviors observed in people who were age 50 or older and who the particpants believed were sociopaths. Nearly 2,400 survey respondents answered questions about their romantic partners, spouses, parents, family members, work colleagues and friends. They reported very high levels of disordered traits and behavior. And the stories the survey respondents told about what they experienced – fraud, abuse, violence – are shocking.

How do you know that the people the survey respondents described were actually sociopaths?

My survey respondents completed the rating scale that was proposed in the first draft of the DSM-5. That’s the official manual published by the American Psychiatric Association. It’s straightforward. There were nine traits, and the respondents indicated whether traits described the individual extremely well, moderately well, somewhat or not at all. I can’t say that any particular individual was a sociopath based on the rating. But as a group, they consistently exhibited extreme or moderate levels of disordered traits. For example, 95% were rated as callous, 94% as manipulative, and 92% as deceitful.

I worked with respected university researchers on a scientific paper based on the same data. A statistical analysis validated the main points of my book.

What should people do if they realize they have a senior sociopath in their life?

The last two chapters of my book provide advice from my survey respondents on how to deal with senior sociopaths and recover from the harm that they cause. The top advice is to get the person out of your life. If that’s not possible, disengage emotionally. You need to protect and take care of yourself.