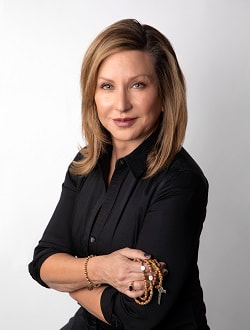 By day, Michelle Moore oversees the COVID-19 testing response as a senior vice president for Laboratory Corporation of America (LabCorp). By night, she is the founder of Mother’s Grace, a nonprofit organization that addresses the critical needs of mothers and their children in the midst of tragic life events.

Michelle is the recipient of MASK Unity’s Moms Making a Difference Award, the highly coveted Hon-Kachina Award and the AIDS Healthcare Foundation’s Philanthropy in Action Award. In 2019, she was awarded the Phoenix Business Journal’s Outstanding Women in Business award and was granted a State of Arizona Commendation by First Lady Angela Ducey for her extraordinary service to the people of Arizona.

Michelle is also a prolific and sought after public speaker on topics such as women in leadership, overcoming tragedy, starting your company/501c3, inspiring women to follow their path, and turning lemons into lemonade.

Michelle’s book, A Mother’s Grace: Healing the World One Woman at a Time, which chronicles the compelling stories of ten women who transformed adversity into a positive impact on their communities, was released in August 2020.
​
Michelle is the mom of three boys and lives in Scottsdale, Arizona.
​About Mother's Grace:

Mother’s Grace is a nonprofit organization that addresses the critical needs of mothers and their children in the midst of tragic life events by helping them with housing costs, medication, meals, housekeeping, childcare, transportation, and a host of other immediate needs. Through mentorship and seed grants, Mother’s Grace also assists women in starting their own nonprofits, with the goal of producing a new generation of women leaders. The organization has raised more than $5 million for families in acute crisis and has assisted more than 6,000 mothers throughout the world.
Myrna Beth Haskell, executive editor, spoke with Michelle about her personal journey, the founding of Mother’s Grace and how the COVID-19 health crisis has affected her leadership roles in both the corporate world and the nonprofit sector.

Tell me about the inspiration behind the founding of Mother’s Grace.
​
This was actually two-fold. I lost my mom when I was five years old. She was an RN and a trailblazer, working with pediatric cardiac patients. Since I lost her suddenly and at such a young age, I think I was looking to fill a void with other moms who were an inspiration just as she was.

I also experienced a journey battling an aggressive form of breast cancer; at the same time, my seven-year-old son [Michelle’s middle child] was rushed to the hospital with Type I Juvenile Diabetes – he nearly died the very night before my chemotherapy started. I was going through chemo while my son had to learn about insulin dependency. This whole experience helped me to empathize with the overwhelming feelings moms go through when a devastating and sudden crisis is upon them. Moms are the backbone of families and need to be held up [during dire circumstances], so that they can continue to be there for their families.

As early as 2005, you helped moms and their families in the aftermath of Hurricane Katrina.*

​This was the unofficial part of the journey. I was still trying to figure out how to specifically help others. I was working as a vice president in the corporate world, but I knew I wanted to make a difference in a significant way. When the hurricane hit, I called for a flight, hopped on a plane, and just headed there.

*In August 2005, Hurricane Katrina, a large category 5 hurricane, devastated New Orleans, LA and the surrounding areas.
*On February 14, 2018, a gunman killed 17 people and wounded 17 more at Stoneman Douglas High School in Parkland, FL.
Your book A Mother’s Grace: Healing the World One Woman at a Time was just published. Please tell me about the message you wanted to share with readers.
​
The book follows the incredible stories of ten women who took their personal traumas and turned it into a positive by helping others. I tapped into the spiritual transformation that occurs and how this enables us to turn tragedy into victory.
​
Readers can find an excerpt from Michelle's book in this issue.
Where do you find sanctuary?
​
Saying the Rosary is very calming for me. Hiking is another sanctuary. I’ve hiked all over - Kilimanjaro, the Grand Canyon – but hiking in the Arizona Foothills is especially a sanctuary. I'm a big music lover, and I listen to music while hiking.