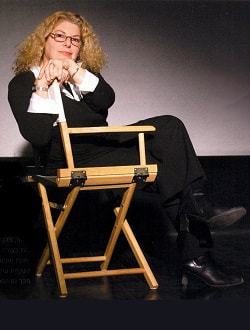 Debra Zimmerman has been the executive director of Women Make Movies (WMM) since 1983. During her tenure, the organization has grown into the largest distributor of films by and about women in the world. WMM’s internationally recognized Production Assistance Program has helped thousands of women get their films made. Films from WMM programs have been nominated or have won Academy Awards year after year, including recent documentary award winner, Citizen Four.

Debra is in great demand around the world as a speaker on independent film distribution, women’s cinema, and marketing and financing. She has moderated panels and given master classes at the Sundance and Toronto Film Festival’s IDA’s Getting Real conference as well as other events in Europe, Africa, Asia and South America. She has keynoted conferences and spoken on panels, including the Women’s Film History Conference at the University of Sunderland, Visible Evidence Conference at NYU, and the Society for Cinema and Media Studies Conference at Boston University. She lectures regularly at universities across the United States.

Debra has been closely affiliated with the International Documentary Film Festival (IDFA) as the co-host of the Talk of the Day and as a tutor for their Summer Film Academy. She has been on the juries of festivals around the world, including the Abu Dhabi Film Festival, International Documentary Film Festival of Amsterdam (IDFA), the Cartagena Film Festival (FICCI), and the One World Human Rights Film Festival in Prague. In addition, she has mentored filmmakers at the Ex-Oriente Film Workshop in Vienna, the Sheffield DocuFest, and, for many years, at the National Alliance of Latino Independent Producers’ (NALIP) Academy. She sits on the Board of Directors of Cinema Tropical, a resource for Latino independent filmmakers and on the Advisory Board of the Center for Social Media at American University.
​
She is the recipient of numerous awards, including the New York Women in Film and Television’s Loreen Arbus Changemaker Award, the Athena Award, and Hot Doc’s 2013 Doc Mogul Award, given to those who “over the course of their career have made an essential contribution to the creative vitality of the documentary industry, both in his or her country or abroad.”
Sanctuary’s co-associate editor Carol Lippert Gray spoke with Debra Zimmerman, executive director, about the organization and her nearly 40-year tenure there.

How did you come to the organization?

A film professor told me about Women Make Movies before I knew I wanted to make films. I saw a film in a barn produced by WMM and decided, “This is what I want to do.”

I’ve never done anything else. [Shortly after college], I rode my bike up and down the street in front of its original office at 257 West 19th Street before I got up the nerve to go in and ask for an internship.

Originally, it was a collective organized around the concept of teaching women to make films. By the time I was an intern, it started doing distribution. Around that time, the federal government decided to cut funding. The organization had financial problems and growing pains and was about to go under when there was an organizational meeting to talk about whether it should shut down.

Lydia Dean Pilcher [now a film and television producer who is a two-time Emmy winner and an Academy Award nominee] and I [discussed] how the organization could survive. We decided to refocus on distribution and started small, acquiring films. It took off and kept on growing and growing. We had an amazing board [of directors]. We started working on programming with experimental films by women using feminist film theory.

​Are the challenges the same as when you started? What has changed?
What would you say are your most significant achievements?

I’m so proud of creating jobs for women. We have an amazing retirement plan and decent-paying jobs with benefits.

Our films and filmmakers have had tremendous success over the last 15 years – [garnering numerous] wins and nominations for Academy Awards year after year.

The organization is known all over the world. We started a virtual film festival for Women’s History Month. At the beginning of the pandemic, it was all set up and ready to go. Over 10,000 people around the world – including in Antarctica – saw our films.

Our film Why Women Stay, on domestic violence, is still in rotation.

We have robust fiscal sponsorship and film distribution, and we act as a nonprofit umbrella to get films made. We don’t do training anymore. If they’ve made their first film, we teach them how to raise money and get tax-deductible funding from individuals, agencies and foundations. We hold hands and give advice regarding lawyers, crew members, rough-cut screenings and fundraising. When their films are finished, we distribute them.

There’s so much left to do. It never ends. We need to do more mentoring, more about leveling the playing field for women who don’t come from wealth, and we need to host more virtual film events. We just want to keep releasing really great films that raise the bar in terms of issues.

Our film Coded Bias is used to educate employers all over the country about bias in artificial intelligence. There are people who want to see our films for empowerment. The other side of the coin is when we get military or police stations to see films on rape and doctors to see the film about forced sterilization in California prisons.

Our films always come to an issue from a feminist perspective. Even with the gains women have made, we are still seeing almost everything from a male perspective.

I love water. I just [visited] my sister who has a beautiful house on the beach. And I spent time on my brother’s sailboat. I also love riding bicycles. It’s my means of transportation in New York. It’s a deep pleasure for me.
WMM Website
​Follow WMM on:
FACEBOOK
INSTAGRAM
TWITTER