Remembering the Past to Avoid Genocide in the Future
An Interview with
Jill Weinberg, Midwest Regional Director of the
​United States Holocaust Memorial Museum 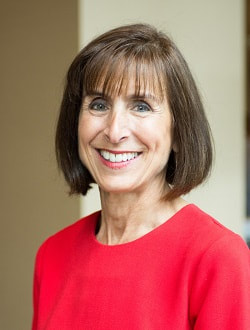 About Jill:
Lake County, Illinois native Jill Weinberg is well-known in the community as a fierce fighter for Holocaust survivors and their children and for advancing Holocaust education in the Chicago community, across the U.S. and around the globe.

For almost 30 years, Jill has led the Midwest Regional Office of the United States Holocaust Memorial Museum in Washington, D.C. Her efforts and the generosity of Chicagoans have made her office the leader in helping the museum ensure the lessons of the Holocaust are not forgotten. Her Highland Park office is one of five national satellite offices for the national museum in Washington D.C. Jill personally speaks to local Holocaust survivors and their children on a regular basis. As the survivor community ages, she understands that their stories need to be heard and preserved.
​
​About the United States Holocaust Memorial Museum:
A living memorial to the Holocaust, the United States Holocaust Memorial Museum inspires citizens and leaders worldwide to confront hatred, prevent genocide, and promote human dignity. Federal support guarantees the museum’s permanent place on the National Mall, and its far-reaching educational programs and global impact are made possible by generous donors. Located among U.S. national monuments, the museum provides a powerful lesson in the fragility of freedom, the myth of progress, and the need for vigilance in preserving democratic values. The museum teaches millions of people each year about the dangers of unchecked hatred and the need to prevent genocide.
Myrna Beth Haskell, executive editor, spoke with Jill about the museum’s history, her work as Midwest Regional Director, and the upcoming annual fundraiser.

What inspired you to become such a strong supporter of the museum?

I had been working for the Jewish Federation of Metropolitan Chicago. I wasn’t looking for anything, but a friend of mine from Washington, D.C. called me and asked if I knew that there were plans to build a U.S. Holocaust memorial museum. Very few people knew anything about the project at the time, but I had heard a little about it. He explained that they wanted to open regional offices across the country, including one in Chicago. He also said he thought I would be perfect for the position, so he wanted to walk me through the plans and introduce me to some of the leadership before I made a final decision.
​
When I saw the model of the museum, I realized this country was only going to build this once, and it was an extraordinary opportunity that I was never going to have again. It wasn’t perfect timing. I was raising my children who were two and three years old, but I decided I couldn’t pass it up. If it wasn’t me, it would be someone else. I was hired to raise the funds that would allow the museum to be built. And that was 33 years ago.
​I am very proud to say that Chicago has been the number one supporter in the country. We don’t have the wealthiest community or the community closest to the museum or the community with the most Holocaust survivors, but we have an extremely caring and committed community.

We continue to build interest by bringing people from Chicago to D.C. In the early years, we were the very first community to enter the museum with our delegation of congressional representatives, survivors and supporters.

In this virtual world we are living in today, we had to create new opportunities. We have lots of free, virtual programming accessible to individuals throughout the world.

What is the museum’s primary goal, and what makes it different from other Holocaust museums?

It was originally created to be a national museum, but it really has become a worldwide museum. Scholars from all over the world have come to do their research and to have access to our archives. The scholars learn from each other which is extraordinarily valuable.

We also have the guarantee that this museum will stand there for as long as this country stands. For those who are looking for a worthy investment, we point to the fact that this museum has permanence.

Please explain some of the exhibits and how the museum is laid out.

When you enter the museum, you receive an ID card for an individual with biographical information and descriptions of their personal experiences.

‘Remember the Children: Daniel’s Story’ is an exhibit space that focuses on remembering how these children once lived joyfully with their parents, and that - step by step – everything was taken away. The Holocaust didn’t happen overnight with the death camps. It was the little things at first, such as books being taken away. Then, they couldn’t go to school. Next, they were taken to the ghetto with just the things they could carry. These were warning signs, and it’s so important to understand them to prevent this in the future. It’s important to look at Rwanda and genocide that is occurring in other places as well.

The exhibits are always changing. Even the permanent exhibit is updated. So, even if you’ve gone before, there is always something new to see.

Find the United States Holocaust Memorial Museum’s Permanent Exhibit Guide.
Imagine the destress that COVID brought to us. This is the most successful fundraiser for the museum in the country which raises over $5 million. How were we going to be able to have a comparable virtual event?

Well, it was always a Chicago event, but it is now available to people wherever they are. However, there is a special focus on our Midwest Region. Regional leadership will run the event, and we’ll honor community members. This gives the local community a sense that they have stake in the game, but it also shows that this museum has a reach around the world.

There is no price point for entry at this fundraiser, but everyone is reminded that the museum doesn’t charge admission (unlike other museums in big cities). This [highlights] why it is so dependent on private support.

What about the future? Will you continue with a virtual event?
​
I think we'll do both. Hopefully, in 2022, we can be back in one room together. But I don’t see this as two separate events. I see it as one event which includes access for people who are not in the room. This will help those who are further away to still feel like they are a part of it.
It was a combination of things that changed this: the museum being built, the miniseries Holocaust [four-part TV miniseries in 1978], and the movie Schindler’s List [Universal, 1993] all helped to change [perceptions]. Many survivors started to share their stories. They realized that people wanted to hear from them.
After Schindler’s List was finished, Steven Spielberg [the director and one of the producers of the movie] set up a foundation [formerly the Shoah Visual History Foundation] to collect the oral histories of over 50,000 survivors.
This is one of the reasons the museum was created and why it is so important to collect everything we can from those who lived through it. These items and oral stories are of great value. Scholars then put all the pieces of this puzzle together to document the atrocities of the Holocaust.

As a woman nonprofit leader and community organizer, what do you feel your best strength is?
Where do you find sanctuary?
​
In my kitchen. I’m a huge baker. I take great satisfaction in baking. In my work, I don’t always see immediate results. Goals don’t happen overnight. When I bake, there’s an immediate result and something I can share – it’s immediate happiness.
U.S. Holocaust Memorial Museum
Fundraiser Information/Registration
Donate
Follow the museum on:
FACEBOOK
TWITTER
INSTAGRAM
YOUTUBE