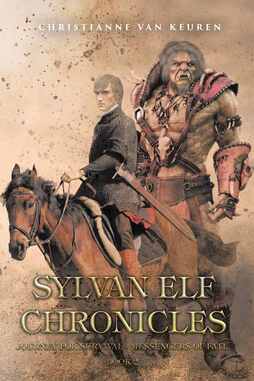 AS the elven council met at Silvarnon, so other factions conducted similar meetings.

The other Elven houses and the villages of men widgeons and forest folk began rebuilding abandoned training fields that had lain dormant for many years. They soon became as active as a new beehive with the youngsters beginning the rigorous training.

Darius enlisted Jake’s help watching Ventina when she was hauled off by the constable after being caught sneaking about. What he could not tell Jake; and this bothered him the most; was Kaleen’s true identity as promised. Jake knew she had left the village, but had accepted Darius’ explanation that it was school and library related. Jake knew Darius was holding back, but knew Darius would tell him eventually.

As with childhood friends, the two complemented one another. Darius is taller, leaner, a fair skinned, freckle faced blue-eyed blonde. Jake is slightly shorter with a stockier muscular build, even fairer skinned, just a spit sprinkling of freckles across his nose. Jake’s hair light reddish-brown, eyes soft hazel, brown-green. Both as equally strong physically and to Darius’ surprise, Jake was as swift as Darius. Each secretly thought they were just a hair quicker than the other was. Both young men were bright, always challenging each other in everything. Alas Jake had more common sense keeping Darius grounded.

As with most boys, there’s always a third - Billy. He was a couple years older than the other two, but they never thought about it; he was just…. well Billy.  Billy wasn’t quite as sharp, but neither of them would want Billy to get mad at them.

What he lacked for in intelligence he made up for with muscle. Billy was loyal to a fault, had a good heart and would do most anything to help someone. Unfortunately, he was easily swayed away from the subject at hand. They did not tell him the real reason for watching Valentina ..and they couldn’t say anything about the elfin children in town.

Billy had an extra toe so he never gave a second thought to Darius’ ears or Jake’s birthmark behind his left ear. Billy thought everyone had something uniquely their own that set them apart from others.

Jake and Darius both knew he became the town crier was after an ale or two at the local pub and would have spilled his guts. They jokingly told him why they were asked to watch her. A few small dogs in the village had gone missing and they suspected that she was eating them. Well, Billy half-heartedly believed Jake and Darius, but mostly he was eager to go along with the request because he disliked the woman. Besides a small dog would occasionally go missing. Jake and Darius must have had a good reason to watch her, so he took their explanation as fact.

Unfortunately, Billy was not discreet as he watched and Ventina caught him. From that point on she became more diligent about her movements about town, especially when she needed to go out on certain nights. She was not sure how many.. if any others watched as the rest of the townspeople appeared to be treating her the same as always.

She had been inexplicably drawn to this town; but could not even after all this time put her finger on why. The town’s people accepted her and her explanation for coming here. She purposely never got very close to any of them thus avoiding attachments. They were merely humans anyway. Ventina chuckled to herself, one or two might make good pets; definitely tasted good. What she also knew was that she would need to get one of them on her side, with a little inducement of course, so she could accomplish what she needed to do for Nalas. People became hesitant when she started to speak about their children; frequently changing the subject back to light banter before walking away. She often wished if she had brought her own child, but then was glad she had thought better of it. His deformities may have gotten some sympathies, but more than likely he would have been the recipient of much ridicule. The fact that he was also half wargi did not help either. He would have trouble maintaining a human form the way she had to.

Her son, Malacai, was the spawn of her union with Nalas. She never even let Nalas know of the boy’s existence for Nalas would have killed him as he was born. Nalas abhorred any new life, even one born as deformed as Malacai. She cried at his birth when she saw him but she loved him because he was part of her and Nalas. She kept him in a cave outside of town, slipping away unnoticed in the dead of night to care for him.

It had been Ventina’s hope that her offspring from a Grace would be as fair as some of the elves. Unfortunately, Nalas only passed on the blackness of his soul. Malacai became the dumping ground for all of Nalas’s hatred, venom and wanton destruction. A twisted creature of limited physical abilities. Gargoyle featured in appearance.

Ventina shook herself out of her maudlin mood as she thought about her son. He was taking her attention away from what she needed to concentrate upon. The children. She was doing as Nalas had instructed; to try and find out which ones were born of the chosen unions by the Graces.

She had to find the one and destroy it before it destroyed Nalas as foretold in the prophecy.

She was under the delusion that if she found the one then she could be by Nalas’ side forever. What she did not realize; as Nalas never told any of his flunkies; was that if he succeeded in destroying the chosen all others would abide by his rule or die.​