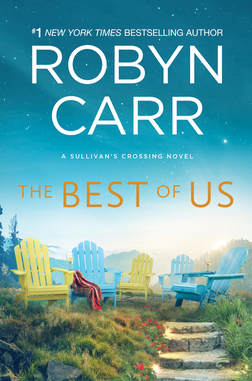 Leigh froze, sprawled atop the bags of trash. Her first order of concern was whether she had landed on anything sharp. She didn’t feel any pain. Her next concern—had she landed on anything really icky? She heard the sound of footsteps—someone was running toward the Dumpster. Her third concern arose—how long was she going to look like a complete idiot?

“Oh Jesus,” Rob Shandon said, peering into the Dumpster. “What the hell happened?”

“Kind of a long story,” she said, still lying across several bags of trash. “Short version, I seem to have lost my phone.”

He grinned at her. “You want to get out of there?”

“Not without my trash,” she said. She moved around and found the one she was after. She tossed it out of the Dumpster. Rob ducked as it flew past. “All right. Can you give me a hand?”

“Yes, Doctor,” he said, reaching for her. He checked the edge of the Dumpster, making sure it wasn’t sharp. “Can you stand up? I’m going to lift you out.”

“The chair isn’t a good idea,” she advised.

“Yeah, I saw that. Just let me get my hands under your arms. Don’t try to help me—I’m going to pull you right over the edge. It’s kind of dirty but no sharp edges. Here, hold my hands until you get upright.”

She had to stand on a pile of trash to get high enough for him to get a grip on her. “Ew,” she said, lifting a foot to which a limp and slimy lettuce leaf clung.

He laughed. “If that’s the worst you get, you’re in good shape. Ready? Here we go.” He pulled her right over the edge and into his arms. And he just held her there. He didn’t even attempt to put her down.

“How did you know I was in there?” she finally asked.

“I was driving by and I saw your legs go over the edge. I knew it was someone from the clinic because of the scrubs but I didn’t know which one of you. I hit the jackpot.”

“You can go ahead and put me down now.”

“I’d rather not,” he said. “Brings something to mind I’ve been thinking about for weeks. We should go out.”

“Where does one go out in Timberlake? There’s no movie theater and you have the best restaurant in town.”

“Thank you,” he said, beaming. “I like to visit lots of different restaurants that are nothing like mine. I started my career working in a five-star restaurant.”

“Well, let’s see,” he said, rolling his eyes upward. “You can get out stains, you’re good with a needle, various things… Maybe we should get to know each other better. Isn’t that why people date?”
“I shouldn’t have rubbed your head,” she said. “I do that with patients who have a lot of fear or anxiety or look like they might puke. It relaxes them.”

“You want to be the only one?”

He nodded and smiled slyly. “How about Sunday night? The pub is kind of frisky on Friday and Saturday night and I like to stay close. There’s this great gourmet restaurant in Aurora—only nine tables. The chef is a friend.”

“This feels kind of nice,” he said. “Okay.” He let her legs drop down but, with an arm around her waist, continued to keep her close. “You said yes to Sunday night, right?”

“Me, either,” he said. “Maybe we’ll get through it okay. I’m very polite. And helpful.”

“You did drag me out of a Dumpster, so I guess I owe you.”

“Dr. Culver,” Eleanor called, coming toward them, holding Leigh’s phone. “It was in one of the exam rooms.”

“That’s right!” she said. “I took it out to see who was calling me and put it on the counter rather than back in my pocket.” She smiled. “You’ll be happy to know I won yet another free vacation. That’s when I turned it off.”

“Then she fell in the Dumpster,” Rob said. “Headfirst.”

Eleanor gasped and covered her mouth with her hand. Then she started to laugh.

Then Rob and Eleanor both laughed—hard.

Leigh crossed her arms over her chest. “I could have been killed, you know. Someone could have thrown away a butcher knife and I could have landed on it. Then would you be laughing?”

Rob draped an arm across her shoulders. “Of course not, Dr. Culver. I also wouldn’t have asked you to go out to dinner with me, so I’m glad you weren’t mortally wounded.”

“Oh, that’s so romantic!” Eleanor said. “You plucked her right out of the garbage and asked her out! What a great story!”

And with that she stomped toward the clinic. She heard them behind her.

“I hope so,” he replied. “A little klutzy, isn’t she?” And they both enjoyed a good laugh.

Later that night, her cell phone rang and she saw it was Rob Shandon. She clicked on Accept, but said nothing.
“You gave me your number, remember?” he said.

“Are you done laughing at me?” she asked.

“I’m not going to tell you you’re handsome.”

“Fair enough.” He chuckled. “Can I pick you up at six Sunday night? I’d really love to take you to dinner.”

“Nothing in Colorado is dressy. I’ll probably trade my jeans for pants but anything is acceptable. You’ll love this place. It’s unique, delicious, there’s a guy who plays classical guitar and there’s always some new creation from the kitchen. It has a cult following—foodies who know what they’re doing. So, I’ll see you at six on Sunday. I hope the rest of the week is less adventurous for you.”

But the rest of the night crawled by, with no sleep for Faith, and no more words spoken.