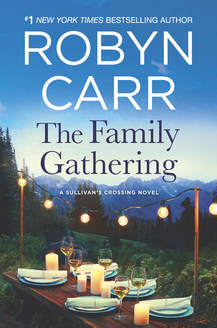 At last it was Monday. Dakota was very calculating. He showed up at the bar between lunch and happy hour. He sat in his usual spot. The place was deserted. He waited for Sid to come through the swinging door from the kitchen. He grinned at her. And it was unmistakable…she smiled back. She slapped down a napkin in front of him. “And how can I help you today?”

“Me? Fine.” She craned her neck to look out the windows. “Are we expecting company today?”

“We are not. I parked behind the diner and walked down. I’m undercover.”

That brought a laugh out of her and she filled a glass with beer for him. “I don’t know why you’re fighting it. Alyssa is perfectly nice. And that other one is certainly beautiful and willing to buy you dinner. And, I suppose, other things…”

“I explained that,” he said. “Trouble. And Alyssa seems awfully young.”

“She’s not that young,” Sid said. “Just something to think about. How about you? How have you been?”

Her face lit up. “Congratulations! And what will you be doing?”

He lifted his beer and took a sip. “Picking up trash.”

She laughed and it was a wonderful sound. “Just as you planned.”

“It’s good money. I have to go to a training program first. Apparently there are things to learn about garbage. I hope they let me drive that big truck.”

She leaned on the bar. “That’s probably a senior position.”

“I’m experienced. I’ve driven great big MRAPs. You know—those enormous military vehicles that are resistant to mines and bullets and carry troops around the desert. I could probably parallel-park a garbage truck.”

She laughed again. He could make her laugh. That was a start. “I might end up their star trash hauler.”

“After your training,” she reminded him.
“I bet I’m at the head of the class,” he said, grinning. “I doubt you have to be a Rhodes scholar to get through it.”

She seemed to snap to attention. “Why would you say that?”

“Just a joke. That was a strange reaction.”

“What exactly is a Rhodes scholar?” she asked.

“A recipient of the Rhodes Scholarship that includes a couple of years at Oxford,” he said. He judged her expression and it was his turn to laugh. “Hey, just because I’m hauling trash…”

“Huh,” she said. Then she wiped the bar. “The Army must have educated you very well.”

“In a manner of speaking. They have this nifty little thing called the GI Bill. When I was in the States, I took advantage.”

She didn’t say anything for a moment. “I guess you’re a little overqualified for the county refuse pickup.”

He raised one brow. “How about you? College?”

She grinned. “What for? I love this job,” she said. “Seriously, it might be the best job I’ve ever had. Except once when I was a babysitter for this rich couple who took the family to France and brought me along to watch the kids. That was pretty sweet.”

“When do you get off work?” he asked.

“Because, Sid, I’d like to buy you a drink or a cup of coffee or something. Because I’m really not interested in Alyssa or Neely with her dinner at Hank’s or Henry’s or whatever, but I think I’d like to get to know you better.”

She looked around. “Well, while it’s not crowded and I’m finishing my chores behind the bar, we’ll get to know each other. I don’t date. I especially don’t date customers.”

“I like you, Dakota, but no. The answer is no. I’m not interested in dating. Not even just a coffee date.”
“I could tell you about all the times I got in trouble in the Army. You could tell me all your babysitting stories. You could fill me in on the town and I could tell you all about their trash.”

“Seriously,” she said. “Do I have to get my big brother?”

He slammed a fist to his chest. “Oh, God! Not the big brother!”

He chuckled. “All right,” he said. “Can I have a Juicy Lucy? With jalapeños?”

“That’s better. Now enjoy your beer and don’t give me any trouble.”

“I wouldn’t dream of it. What did you do over the weekend?” he asked. “On your days off.”

She ignored him while she keyed in his order. He could tell she was deciding whether it was a good idea to talk with him about personal things. Then she was back. “I did laundry, took the boys to the store for sporting gear, went for a hike, made their favorite Saturday night dinner, watched two movies and read a book.”

She just made a face. “What did you do?”

“We had a family dinner,” he said. “I have family here, did I mention that?”

“A brother, a sister, a sister-in-law and her father, a potential brother-in-law, a six-month-old niece. We ate, and after Sully went home we played poker till midnight.”

Her mouth fell open. Bingo, he thought. He was going to keep his private life from the town for now, but getting this woman’s attention had been too problematic.

“You’re related to Sully?” she asked.

“Then you probably know Cal, Maggie, Sierra and Connie. My family.”

“You didn’t tell me,” she said. “I consider them all friends. Not that we socialize or anything, but we see each other here and there. I see Sierra sometimes since we both work in town. Hmm.”

He smiled. “Now can we have coffee?”

“Right,” she said. “And you’re a perfectly nice guy but you’re looking for a woman. Not a friend.”