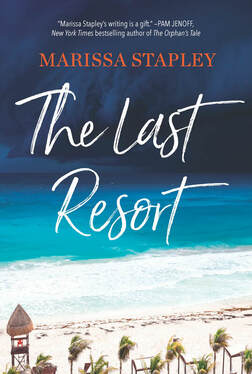 As Shell followed the small crowd through the lobby, she found herself behind a young couple who were holding hands. Through a veil of irritation at being stuck, unmoving, behind them, she read the woman’s tattoos: You are not your thoughts written in barely decipherable script on her left shoulder blade and another on her forearm: And meanwhile the world goes on.

Or it doesn’t, she could say to this very young woman. You don’t know, she could hiss. No wonder her husband despised her so much he looked past her instead of looking at her. No wonder he was still in the van. He was married to a bitter crone. Shell stayed silent.

But still, she imagined a parallel universe where instead of ironing her clothes until they had sharp creases, she wore tank tops with no bra and was as sexy as a pinup girl, and her husband was holding her hand instead of back in the van obsessing over safety checks for the northern Ontario gold mine that was his new lover, his new best friend, his new family, his new everything to replace all they had lost. Vacations had done this, once: stirred up fantasy.

The woman with the tattoos smelled liked neroli and musk. Her hair curled at the ends and reminded Shell of her young daughter’s, when it dried while she was sleeping.

These thoughts, they were dangerous ones.

But her thoughts were interrupted by a voice behind her. “Hello, there.” Shell turned and found herself looking up at Miles Markell. He was larger than he appeared on TV. Most people were smaller. “Is everything all right?”

“No,” she found herself saying in the horrible woman’s voice she could never quite believe was now her own. “I wouldn’t be here if everything was all right, would I?”

His teeth were white against the tan of his skin. He smiled, then laughed, then took off his glasses and rubbed at his eyes before looking at her for a long, thoughtful moment. “Excel­lent,” he said as he replaced the dark-rimmed spectacles. “A woman after my own heart. A woman who tells the truth.” He had deep smile lines on either side of his mouth. His eyes danced, like he was suppressing some secret joke that he wanted to share. She felt like they were alone when he looked at her, and this embarrassed her. “Shell Williams, right?”

“I like to guess at the identity of our couples,” he said. “Grace and I keep score, actually.” He winked. “But you’re not supposed to be here alone. Where’s your other half?” His mild Texas drawl was like butter melting, nothing like the voices she heard back home this time of year, when everyone's teeth involuntarily gritted against the winter’s cold.

“Work call,” she said. “Still in the van.” Miles looked to­wards the driveway. “Ah. I see he’s taking advantage of our unwritten rule: you’re allowed to have phones until you set foot on resort grounds. Does he have a flask of whiskey with him, too?”

“No,” Shell said, and now she didn’t smile. She supposed there was such thing as too much truth.

Miles lifted a manicured hand, snapped a finger and called out, “Ruth!” The young woman Shell had seen in the back­ground of some of the Markells’ online videos, their assis­tant, appeared. Her voice was firm, her manner capable. Her foundation was caked in her eyebrows.

“Could you please help Mr. Williams out of the van?”

“Got it,” she said, and trotted off. Shell stood behind Miles and wondered what, if anything, she should say. But before long, Ruth reappeared with Colin at her side.

“Got him,” she said, triumphant.

“I’ll just put this in the lock box,” Ruth said, holding up the phone like a prize. But Shell knew Colin had another phone in his luggage. She could tell on him—but at her own peril. So she said nothing.

“All right, get going,” Miles said. “Everyone else is already upstairs.” He placed his hand on the small of her back and urged her towards a set of stairs at the far end of the lobby.

“I should see to our luggage,” Colin said, frowning.

“I need to check in at home,” Shell said at the same time and Colin looked at her sidelong, but just for a second.

“We have valets for your luggage,” Miles said. “Do you see your bags anywhere? And there’s no time to go to your villa now—but trust me, you’ll feel refreshed after the ceremony.” He put his hand on Colin’s shoulder now and pulled him forward. “Come on, let’s go.”