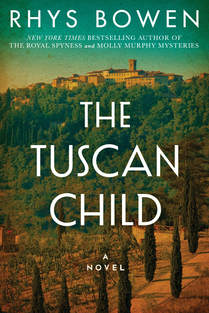 I felt quite cheerful when I opened the first of the trunks and was surprised to find it contained more pictures, only this time bright modern ones. I was looking at splashes of Italian sunshine, old stone buildings, black cypresses. And I read the signature in the corner Hugo Langley. So my father really had been a painter. What’s more he had been talented. What on earth made him give it up?

I put the pictures aside, intending to show them to Nigel. Maybe they would fetch serious money at an auction if I could bear to part with them. Then I opened the second trunk. This one held old albums with leather covers and impressive clasps. Photos of long ago Langleys in long dresses and ridiculous hats, frozen in time as they posed for a camera, or standing in groups outside Langley Hall holding tennis racquets or having tea on the lawn. I was witnessing the lifestyle I’d never know. I put the books aside and delved deeper. A silver cup presented to Sir Robert Langley as Master of Hounds. A smaller one to Hugo for winning the high jump at sports day at Eton. Then I came to a small leather box, beautifully tooled and gold embossed. I opened it, anticipating those long lost jewels and almost closed it again when I saw that it contained only a tiny carved wooden angel, what looked like a medal of some sort on a ribbon, a cigarette packet, a bird’s feather and a folded up envelope. Why anybody would keep such trifles in such a lovely box I couldn’t imagine. Some long ago Langley playing a game of pretend as I had done as a child, maybe.

I took out the cigarette packet to throw it away when I saw that it had been opened and on the inside of the cardboard was a sketch of a beautiful woman. It was only a tiny sketch, hastily done and not in any way finished, but somehow it conveyed the woman’s personality. I could see her eyes almost sparkling with amusement as she looked at her sketcher, her mouth about to smile. I smoothed it out and put it down on the table. Then I unfolded the envelope. I recognized my father’s elegant handwriting. It had an airmail stamp on it and it was addressed to a Signora Sofia Bartoli in a place called San Salvatore in Tuscany. The date beside the stamp was April 1945 but it had never been opened. Another stamp beside the address was in Italian but I got the gist of it. Not known at this address. Return to Sender.

Intrigued now I tore the envelope carefully open. To my annoyance the letter was in Italian. I managed to read “Mia carissima Sofia.” I stared in disbelief. I couldn’t imagine my cold and distant father calling anyone his beloved. He certainly never showed any such outpouring of affection to my mother or me. I tried to read on, but the rest was beyond me. Then I remembered an Italian dictionary among the books I had put in a box to take to the charity shop. I ran to retrieve it then sat at the kitchen table, frowning in concentration as I tried to make sense of the words. It was lucky I had had years of Latin and French because that made it easier, and when I had finished I could not quite believe what I had translated. Surely I must have got it wrong. I went through it again.

My darling Sophia. How I miss you every day. How long the months have seemed since I was with you. All that time in hospital, not knowing if you were safe, wanting to write to you but not daring to do so. But I have good news. If your husband is indeed dead then we are free to marry. When I was finally allowed to return home to England. I learned that my wife had found someone else and left me for a better life in America. As soon as this horrible war is over, and the news indicates this will be very soon, I will come for you, my love. In the meantime I want you to know that our beautiful boy is safe. He is hidden where only you can find him.

I broke off in amazement. My father—my distant, unemotional father, had a child in Italy. A child with an Italian woman called Sofia. But hidden where only Sophia could find him? A chill came over me. The letter was never delivered. A child hidden away and never found? Of course now, twenty-eight years later, I had to hope that Sophia recovered the child and all was well.