More About the Bestselling Book
Hidden in Plain Sight 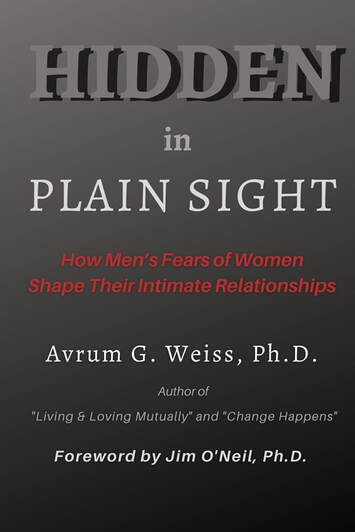 "Although the title seems focused on men, Hidden in Plain Sight is as helpful for women seeking a better understanding of the men in their lives as it is for men who want a deeper understanding of themselves."  ~ Avrum G. Weiss, Ph.D.
​"We have to talk about the trouble with men. We have to understand why they fear women so much." ~ Meryl Streep
Have you ever wondered why there are so many books written for women purporting to help them understand men and why most of those books are written by women? Women often mistakenly believe that men are mysterious by choice as a part of a larger strategy to maintain their control in relationships. Dr. Avrum Weiss, in his new book Hidden in Plain Sight: How Men’s Fears of Women Shape Their Intimate Relationships, explains that men are as much a mystery to themselves as they are to women and that their opaqueness and emotional withdrawal in intimate relationships are a reflection of their fears of women.

Men afraid of women? It’s pretty clear that women are afraid of men, and with good reason, but what do men have to be afraid of? Men have done such a good job of hiding their fears and vulnerabilities that even their mothers and lovers don’t know how scared they are. Yet, these fears are one of the most powerful and pervasive shapers of men’s interior lives and their relationships with women. When we stereotypically reduce our understanding of men in intimate relationships as commitment-phobic, emotionally withholding, or shut down, we do a disservice to men and profoundly misunderstand what is happening in couples. When we understand the fears that lie beneath these defensive postures in men, then everything changes.

Weiss suggests that men’s fears of women include the fear of being dominated and controlled by women, the fear of being inadequate and failing to please women, and the fear of being abandoned. These fears drive a typical pattern of conflict in heterosexual relationships that researchers have called “wife demands/husband withdraws (WD/HW).” Women in straight relationships often initiate conflict because they often do not get the kind of emotional connection they yearn for, which is why women initiate most divorces. Women learn that trying to talk to their partners to get more connected often backfires. No matter how carefully women frame their requests for more connection, their partners inevitably feel criticized and withdraw further. On the other hand, counter-intuitively, women learn that when they lead more with criticism and demands, their partners are often more responsive.

Women often don’t understand that their male partners are more responsive because they are scared. Men are socialized to believe that their job as a man is to provide for and protect their partners and satisfy their needs. Men hear any expression of unhappiness by their partner as an indictment of their inadequacy as a man. To make matters worse, women are raised to feel comfortable with their feelings, so it is natural for them to be emotional in pursuing contact with their partners. In contrast, men are taught to suppress their feelings and that it is not masculine to be openly emotional. As a result, as their partners get more emotional, men feel increasingly threatened by the strength of the feelings evoked in them. The more emotional women get, the harder men work to “stay rational.”

These dynamics often result in couples unknowingly working at cross purposes, with women striving to make more of an emotional connection with their partner and not understanding that the intimacy they seek is threatening to their partners, leading them to withdraw to protect themselves. Women pursue men because it sometimes seems the only way to get any real emotional connection, but the more women pursue, the more scared men get and the more they withdraw. As men withdraw further, women get increasingly distressed and pursue harder. One woman said, "I've been angry at my husband for so long because of what I assumed was his unwillingness to hear me or take me seriously. I've come to understand that his withdrawal was not meant to punish me but to protect himself. I had no idea how scared he was to mess up with me and not be enough. I didn't understand that I was so important to him and that he was terrified of losing me. I feel like I'm falling in love with my husband all over again, only this time it's a more mature love because I understand so much more about who he really is and how things work best between us."

Men are afraid of women because the way we raise boys puts them in an impossible bind. In our culture, we teach boys that to be a man means not showing any feminine qualities. Masculinity is something you have to earn and then protect by never showing evidence of any feminine traits, such as vulnerability, emotional openness, or the desire for connection and intimacy. Boys are just as interested in connection and closeness as girls are. Still, as they get older, we force boys to choose between the closeness and intimacy they have grown up with and the status and privilege available to them by becoming a man. Research substantiates that this internal conflict for men is strongly related to the higher rates of physical illness, loneliness, and unhappiness.

Although the title seems focused on men, Hidden in Plain Sight is as helpful for women seeking a better understanding of the men in their lives as it is for men who want a deeper understanding of themselves. Weiss recommends that men begin by talking with other men. He suggests that men form small groups to discuss his book and offers guidelines for groups that want to continue as ongoing support groups. There is also a chapter written specifically to help women understand the work they can do to help their partners feel less scared. The final chapter helps couples understand why they may be stuck in the same unsatisfying patterns of conflict and offers concrete guidance on how to break out of those patterns.