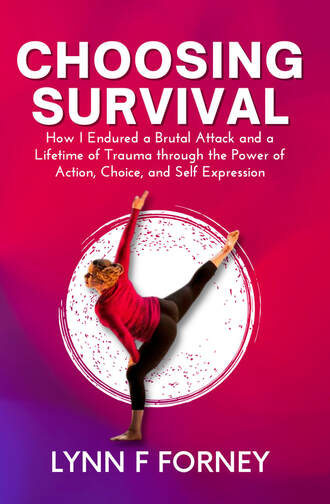 ​Backstage, covered in sweat, I quickly changed into my next costume. A red dress with a form fitting bodice, tight sheer sleeves, and a skirt that spreads wide when I spin. I was so happy when I found it. I had ordered one on Amazon, but it made me feel frumpy and sad. I refused to do that to myself. I had been stuck in too many costumes throughout my life that didn’t flatter me. This was my choreography. My solo. My story. And I would do it justice. I searched for ballroom dresses, thinking that might give me the fit and flare I desired. And, I was right. There it was. Simple. Elegant. Beautiful. It was so close to what I had envisioned. [...] The one I would pick up as I stood alone, under a red spotlight. And, as the lights began to fade, the one I would use to strangle myself.

My choreography has always come from a deeply personal place. One that allows me to transmute my feelings. My emotions. The thoughts I’m unsure how else to express. It comes naturally to me. I feel at home on the stage. Safe. Powerful. Free. For me, there’s nothing else like performing. And when I perform my own work, those feelings are amplified. They vibrate through every cell of my body. And it is my greatest desire that those vibrations travel out into the audience [...] [and] allows those emotions to flow through them. To be released. To be freed.

I got into the studio, still unclear about the story behind the work.  But I needed to start as our show was quickly approaching.  Generally, I see things play out in my head before I start moving. If you were a fly on the wall in one of my rehearsals, you would see me just stand there and stare off into space. A lot. I also use other tools, such as improv, but I’m extremely visual.  I didn’t know the exact movements, but I had a clear outline in my head. I also knew the style of music I wanted with it. I started to play around with movements, still thinking that this might center around eating disorders or body dysmorphia. And suddenly, mid movement, it hit me.  I knew exactly what this piece needed to be about. Post Traumatic Stress Disorder. PTSD.

My heart hurts for others who have experiences like this. It hurts more when I read articles about PTSD. And when I read that people trigger others on purpose, I was livid. I couldn’t believe it. PTSD survivors were tormented because others’ thought it was funny. A joke. Not real. I was angry. And instead of sitting in anger, allowing it to seep in and take me down, I wanted to transmute it. Transform it. It made me more determined. More brave. I realized it was not only my story I was sharing. It would be from my perspective, of course, but it was for anyone who could relate. Anyone who needed to be seen.  Conversely, it was also for anyone who couldn’t relate. Who needed to see. And I would use my beautiful red dress to help me show them.

On stage, I smiled in my lovely dress and performed movements that would indicate I was powerful, happy, and free. Then suddenly a red light would shine that would stop me in my tracks.  Just how PTSD did to me. It appeared out of nowhere, grabbed hold, and set me free when it decided to.  Only then could I regain my composure. I mirrored this feeling in the dance.  Once this sequence happened three times, I ran back and forth, pleading for help until I threw myself to the ground. At this point, I shook and writhed, pulling at my dress. Then I had to get it off of me. This dress that once made me feel so beautiful. I moved away from the dress feeling more exposed. Moving more disjointed. Then I couldn’t help but be pulled back to it.  I slowly picked it up and held it along the front of my body. I began dancing again. Balancé, balancé en tournant with my partner. I was hopeful in those brief moments. Then, slowly, contemptuously, the red spotlight illuminated the stage, setting its sights on me. I grabbed the sleeves of my dress, wrapped them around my neck, and began to strangle myself. Just as PTSD strangles those it possesses.

After our performance, we held a Q & A. From the audience, a young male told me he cried during my performance. Something in it allowed him to open up and weep. I didn’t fully know what to say, but I could feel my heart expand.

Privately, a close friend came up to me after the show and just said, “Lynn…..your solo….your solo.”

Another private moment was shared with a different woman. A woman I didn’t know. She stood in front of me with her hand over her heart. Her eyes welled up with tears, and she said, almost in a whisper, “Thank you. Thank you.” Tears formed in my eyes as we just looked at each other.

This is why I created that piece. The one that exhausted me both physically, mentally, and emotionally. The one that also helped me heal. The one I entitled, “Please Know Triggers Seldom Discriminate.”