This section includes a peek at the latest in theater, reviews of women-only exhibits, reflections on something interesting in film,
a snapshot of ​a special cultural or community event, etc.
A Marriage of Life and Art
Sophie Taeuber-Arp at MoMA (through March 12, 2022) 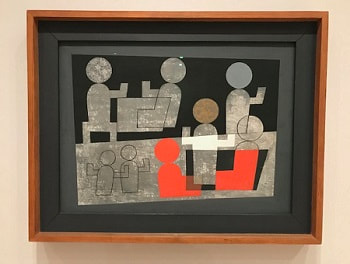 Sophie Taeuber-Arp's Cafe (1928)
By Sandra Bertrand
Sophie Taeuber-Arp (1889-1943) was one of the most multitalented of modern artists who ever lived – from applied arts teacher, textile and puppet-maker, mural and stained-glass designer, creator of furniture and building interiors, magazine editor, painter-sculptor to a master of geometric abstraction. But her greatest talent? She was a consummate marriage broker, wedding the lofty world of artmaking to life itself.
Such social fermentation among other artists led to greater experimentation in her work, with active participation in the DADA movement. Centered in Zurich, the movement’s artists, poets and performers embraced its tenets as a reaction to the horrors and folly of war. Though satirical and nonsensical in nature, the intention was serious rejection of formal society. (Close friends with famed DADA artist Tristan Tzara, she was a co-signer of the Zurich DADA Manifesto.) One of her most famous works, Dada Head from 1920, resembles the small stands used by hatmakers of the day.
When the Arps moved to Paris in 1929, she joined the abstract artist group, Cercle et Carré, (Circle and Square), where her non-objective paintings took precedence over earlier textual experiments, triangles and squiggles artfully intertwine with one another. Abstraction equaled freedom for this group: “Any attempt to limit artistic efforts according to considerations of race, ideology or nationality is intolerable.”

​By the late 1930s, her work on paintings, collages and gouaches continued, but political tensions mounted. Before the couple fled to the south of France, finding refuge in a small town called Grasse a week before German troops advanced into Paris, she published the last of Plastique/Plastic, a magazine intended as a channel of communication between Europe and America. She continued to draw, but the climate grew more ominous and the Arps moved on to Zurich. Tragically, a few days before her fifty-fourth birthday, she died accidentally from carbon monoxide poisoning from a gas leak in her sleep.
​
It's hard to believe when confronted with her prolific career, that Sophie Taeuber-Arp was never given a solo show during her lifetime. She leaves behind a legacy of “living abstraction,” which is perfectly apt for an artist who valued art as life itself most of all.
View Senior Curator Anne Umland’s thoughts about the exhibition below:
Sandra Bertrand is an award-winning playwright and painter. She is Chief Art Critic for Highbrow Magazine and a contributing writer for GALO Magazine. Prior to working for Sanctuary as Culture & Travel Editor, Sandra was a Featured Artist in May 2019.