I Am Not a Tractor!
How Florida Farmworkers Took on the Fast Food Giants and Won
(ILR Press)
© 2017 Susan L. Marquis 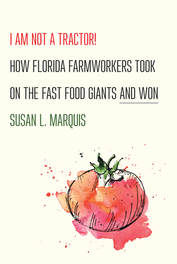 Immokalee? Immokalee was the place you wanted to leave as soon as you arrived. It was a place notorious for abusing workers, not for making them rich. Gerardo Reyes was little more than a kid when he followed the siren’s call to Florida. Tall and thin with a small gap between his front teeth that shows up when he smiles, Gerardo was wiry and strong when he showed up in Florida in 1999. Gerardo backtracks to fill in the details over lunch in a Cuban restaurant a few blocks from the Coalition of Immokalee Workers’ offices. His family needed money and he and his friends knew they would be the ones who worked hardest and could make a lot more. What they hadn’t understood before they came north was that there is a common characteristic to the stories told by those who went before. “People who immigrate - really it is humanity in general - don’t want to talk about when you lose, or something [that] went wrong, or it wasn’t what you expected. They don’t want to look like fools. These stories don’t make it back when people return to their home country. They’ll talk about the one moment when it was incredible.” The recruiters play to that legend. Let your sons come with us to work in the United States, they say to the fearful moms and dads. Dignified wages. Fair treatment. “It’s a mirage that serves as a façade for a painful reality.”

The pain of that reality had become fully evident to the three young men. They’d started out near Winter Haven, further north in Central Florida, picking oranges. But Gerardo and a few of the others had heard the legend in Mexico. “People who pick tomatoes make a minimum of $70 a day; those who worked hard could make a lot more.” Immokalee was where they needed to go. They did find work, on a pinhooker crew. Pinhooking is, according to one story, a word derived from the Spanish verb “pintar,” meaning “to paint” or “to ripen.” Pinhookers can pick and sell any produce, but are most common in tomatoes. Most workers harvesting Florida tomatoes are picking the hard, round green tomatoes later sprayed with ethylene gas to get that orange-red color of out-of-season supermarket tomatoes. In the fields, color on a tomato means it must be left behind to prevent the risk of being damaged in shipping. Pinhookers come behind these workers, glean the tomatoes that have begun to ripen and any others not picked, and sell them locally.

A dollar a bucket of tomatoes sounded good, but it was the end of the season. You could pick thirty-five or forty buckets a day, fifty if you were really expert. For forty dollars a day, Gerardo and his friends met the crew leader at 3:30 or 4:00 in the morning for transportation to the fields in Palmetto, shut into the box of the truck along with the stacks of tomato crates. Once it got dark, after a full day in the fields, the crew leader and his crew went to the packing house to drop off the tomatoes. Dropped off in Immokalee at close to midnight, the guys would fall asleep on mattresses on the floor of a trailer where they were staying, and get up a few hours later to start all over again.

The work was hard. The truck box baked in the sun. But what was worse was that it had been two weeks and the three had run out of money and hadn’t been paid, and debt was building fast. The crew leader had paid the deposit for the trailer but was paying himself back before he paid Gerardo and his friends a dime for their labor. And they still had to pay rent and buy food. Two weeks without a paycheck meant the three couldn’t buy cooking utensils or basic supplies and so couldn’t cook their own food. They were surviving with the help of a relative who had a lunchero, or food truck, that came by the fields each day. They could get one meal a day from the lunchero on credit. It was food and kept them going, but the debt just kept growing.

Finally, it was a couple of days before they expected to finally get paid, and the young men had to do something. Gerardo asked the crew leader for an “advanced payment” so that the friends could buy cooking utensils and food to cook in the trailer. The crew leader said no. “I have no obligation to pay you in advance.” “We said we understood but…Because we insisted, [the crew leader] got annoyed with us. We said that where we grew up [in Mexico], denying a basic request like this was a big insult. We were not going to work for someone who was unwilling to give us $20 so we could cook our own food.” And so Gerardo and his friends left the crew leader and the job.

Having stood on principle, they were now standing in the dark on Immokalee street corners. “We were jobless, homeless, and penniless, all in the same week!” The pinhooker crew leader had told the trailer’s owner that his workers no longer needed it. When the young men showed up after leaving the crew, the trailer was locked. Fortunately, the guy who maintained the trailers took pity on them and said they could sleep in the trailer for a couple more nights, if they stayed hidden. But they still had no money and now couldn’t even get something to eat from the lunchero in the fields.

The optimism of youth, or ingenuity that comes from desperation, led to a plan. Waking up at 4:00 in the morning and sneaking out of the trailer, the three men stationed themselves at corners along the main street in Immokalee, where the crew leaders and their buses or trucks drove each morning. The first person to see a crew leader would ask for work. When Gerardo saw headlights heading his way he followed the bus to where it stopped to load farmworkers. Waiting for the other workers who were already on the crew to board, Gerardo could hear the men talking to each other. Orange groves. Gerardo would tell the chivero, the name used for citrus crew leaders because of the mechanical arm on a citrus truck that was known as a goat or chiva, that he and his friends were experienced workers.

Gerardo stood on the steps of the bus. “We’re looking for work. Will you hire us?”

Having learned the ways of Immokalee, “I negotiated the money up front” and then continued. “We don’t have a place to stay and we haven’t eaten very well lately and have no money. So could you give us money in advance if we work with you?”

“Wow! You’re really screwed! Get on the bus and we’ll figure it out.”

The chivero’s laughing acknowledgment of the possibility of work was the first ray of light to cut through the grim circumstances in which the three workers found themselves. What they didn’t yet know was that fate had put them on a bus driven by a longtime CIW member, Silverio.

The door closed and they were on their way again.