Editor's Note: As many of our readers know, Sandra Bertrand is also an accomplished painter. We couldn't resist including her piece "Sun Gate at Machu Picchu" as part of this installment of Travel Journal. See if you can find the photo that inspired this piece in the article below. 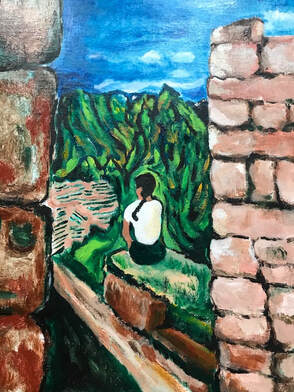 Sun Gate at Machu Picchu
Oil: 24 X 18 inches
​© Sandra Bertrand
At the end of Part I, readers were left wondering what happened to Sandra and Joanne after their autobus was forced to navigate an alternative route through a smoke-filled tunnel due to their path being blocked by large boulders dislodged after an earthquake.
By Sandra Bertrand
Emerging from the dust-filled tunnel, the air still clouded from the morning’s landslides, we greedily gulp for air. Elfar rolls down the windows of the autobus, throwing us a good-hearted belly laugh. “Didn’t I promise you a good adventure?”

We must admit, our tour guide delivered. We head down the canyon, marveling at the emerald hillsides of the Colca valley - a wonderland of agricultural terraces pre-dating the Incas still in use, ringed by snow-peaked volcanoes. Thanks to Elfar, we had gazed upon the same spots considered closest to the apus (mountain gods).
​There’s a reason why travelers are forewarned against plane-hopping from Lima to Cusco for the trek to Machu Picchu. To go from sea level to over 11,000 feet can be a shock to the hardiest constitution, so gradual acclimation, with an extended stopover in Arequipa at 7,661 feet, is recommended. I entertain such statistics until the light of dawn seeps into our cabin.

​​It’s a glorious sun-spattered morning to be alive. At least that’s my mindset until our cabbie dumps us in the small plaza of San Blas, high above the city’s center. We had chosen this artsy barrio for its celebrated charm, but our rental is situated beyond a muddy construction site only navigable by foot. It appears that ancient irrigation gullies no longer function as the Inca rulers had once intended. With a bit of sleep-deprived grumbling on my part, we haul our wheeled baggage up the steep incline to our new home.
The Archbishop’s Palace, otherwise known as the Museo de Arte Religioso, offers a cool retreat. It was once the residence of Inca Roca (one of twelve emperors down through the centuries). Most memorable are the portraits of Saint Jerome and a royal carriage in exquisite condition.  Most curious are twelve landscapes adorned with zodiacal signs. The artisans knew such astrological iconography was one way to persuade the newly converted of a deity that shared their views.
​Another standout for historical art-gazing is the Museo de Arte Precolombino (MAP). Dating from 1250 B.C., the visitor will find hundreds of artifacts, further enhancing the vast collection we found at Museo Larco in Lima.

There’s an ample array of places to watch the world go by off the main plaza. But what warms the spirits (pun intended) are those you discover before your legs turn rubbery from the day’s agenda. Baco is the best wine bar to be found, serving gourmet pizzas and plenty of nouvelle Andean cuisine.
​On one chilly star-strewn night, we are confronted by a convocation of canines of every size and breed, an occasional ribcage poking out of the mix. What looks like a shiatsu catches my eye, its scruffy little body covered in a dirty sweater. There isn’t a dogwalker or owner to be found. Apparently homeless, after quickly sniffing us out, the band are on their way for better prospects.

With the lateness of the hour, we pick up our pace, grateful enough to curl up in front of the space heater our landlady provided.

If you do take in the charms of San Blas, its tiny plaza boasts a perfect quinta or open-air restaurant, a convenient wood-fired oven in the courtyard. Pachapapa’s grilled cuy fish with Huacatay mint will help you while away an afternoon with no regrets. You can also get a taste of home at Jack’s Café Bar. It’s a gringo hangout but pancakes, surrounded by smiling nortamericano faces, won’t disappoint.
​The Sacred Valley and Ollantaytambo

The Sacred Valley lives up to its name with its cobalt blue skies and green fields lining the Urubamba River. Dating from the 15th century, Ollantaytambo with its formidable ruins became the hidden stronghold of the first emperor Manco Inca, following his defeat at Sacsayhuama (another unmissable fortress atop San Blas).
​Machu Picchu
Sandra Bertrand is an award-winning playwright and painter. She is Chief Art Critic for Highbrow Magazine and a contributing writer for GALO Magazine. Sandra was Sanctuary's Featured Artist in May 2019 and is also Sanctuary's columnist for "Travel Journal." ​
Archives