Interview with
Gloria Vanderbilt
Artist, Author, Actress, and Designer of Textiles and Fashion 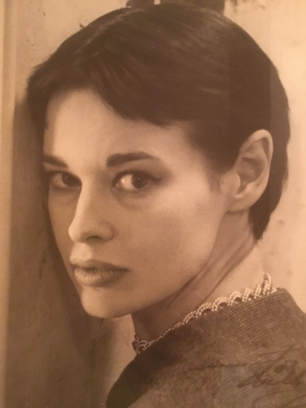 Gloria Vanderbilt, a member of the prominent Vanderbilt family of New York, is an artist, bestselling author, actress, and designer of textiles and fashion. After spending years acting and modeling, Gloria moved into the fashion industry in the 1970s in connection with a line of fashions, perfumes, and household goods bearing her name. She also became an early developer of designer blue jeans.

Gloria has written two books on art and home decor, four volumes of memoirs and three novels. She has also been a regular contributor to The New York Times, Vanity Fair and Elle. On April 5, 2016, HarperCollins Publishers released a book, coauthored by Gloria and her son Anderson Cooper, titled The Rainbow Comes and Goes: A Mother and Son On Life, Love, and Loss, a touching and intimate correspondence between mother and son offering timeless wisdom and a revealing glimpse into their lives. On April 9, 2016, HBO premiered Nothing Left Unsaid: Gloria Vanderbilt & Anderson Cooper, a two-hour documentary, produced and directed by Liz Garbus, that featured a series of conversations between Gloria and Anderson, covering Gloria’s storied life and family history in the public eye.

Gloria has been the recipient of an honorary doctorate of fine arts from Moore College of Art and Design in Philadelphia, PA. She has received many awards, including The National Society of Arts & Letters Gold Medal of Merit, the Anti-Defamation League Woman of Achievement Award, and an Excellence in the Arts award from the National League of American Pen Women (NLAPW).

Gloria is currently collaborating with Joyce Carol Oats on a book that will juxtapose images of Gloria’s “Dream Boxes” (Plexiglass constructions combining mixed media) with Oats’ poetry and essays.
Contributor Pearson Marx talked with Gloria about her love of painting and her artistic process as well as how she compares the creative pursuits of painting and writing.

You are a polymath when it comes to creative art. I mean, I think the one thing you don’t do is play the bagpipes! [Laughter] You’re an amazing writer and painter.

Well, if you have a moment, I’ll bring them out. [More laughter]

What is it that writing does for you, creatively and emotionally, versus what painting does?

It’s totally different. I do so much re-writing. I really don’t have a ball doing it; whereas, I do when I’m painting. I really love to paint, and it comes naturally to me. I try to write as if I’m writing to myself, in a sense…or to my closest friend, which makes me feel free.  But then I start agonizing…thinking about whether the sentence should begin with “I’m happy to see you today” or “You look great!” or “We haven’t seen each other in such a long time" - which one adds to the story line? And I find it exhausting to have to make that kind of decision. Whereas with painting, it literally falls on the page. It’s like channeling. I don’t even think about what I’m going to do. It just happens.
Did you feel supported and encouraged in your painting? Did you have teachers, mentors?

Oh yes. Although, Greenvale was not about painting - art was sort of a sideline there. At the Wheeler School, they were very encouraging and would let me go work in the studio at off hours.

Don't you think it’s important when you’re starting out in any creative field to have somebody say “This is wonderful” in order to feel that validation?

I didn’t care what people thought. It was just what I wanted to do. It was what I wanted to do from the beginning, but then other things came in, and it was a long time before I started painting full-time. And, in the meantime, I wrote books and didn’t paint at all. It’s something that comes with great joy for me.

That comes through in the paintings. It’s impossible to look at your paintings without smiling and feeling like you’re escaping from the grind of life, and the grit, and the gray. It’s like being a child again in a riotous garden of color. They have a child’s joy about them.

That’s a great compliment to me. They’re not edited at all. What you see is what you get! I wanted all these paintings, which I knew were going to be for sale, to have a theme of joy and positivity and hope. There are none that are depressing.
Do you use photographs or are you more interested in what your mind’s eye is seeing?

My mind’s eye. I don’t use photographs at all.

Do you think this unbelievable outpouring of work would have been possible had you been going out a lot?

Not at all.  It would have been impossible. I would love to just wake up and start working and not even have to brush my teeth!

Is there anything you would exchange this creative power for - like the little mermaid who gave up her fish tail when she fell in love with the prince?

No. But you know, it’s very facile to me - it comes so naturally. I feel so lucky that I don’t have to agonize over what I’m going to paint. Images come to me, and I just start…it puts itself onto the page. It’s the product of the moment. Whereas I look at some of my old stories, and my God, I think, if I could just cut it, cut it, cut it…not all of them, but I tend to be too hasty to let a story go, instead of patiently putting it aside for a couple of months and then going back to it. Makes all the difference.

Would you rather date a great painter or a great writer?

Gloria [laughing]: Neither one! I do think a great painter would be better because a great writer is always going to use stuff from you.

Have you ever found it difficult to combine your creative work with being a wife and mother?

Not at all. One sustains the other.

Looking back, would you say you’ve done your best work when you’re in love or when you are between relationships?

I think my best work has been done when I’m not in a relationship…because of the intense focus that allows.

In my apartment, where beauty abounds. And with the people I love. It has taken me my whole life [95 years] to discover that my life has been one “long, long trail a winding in to the land of my dreams - where a nightingale is singing and the white moon beams."*

*Lyrics from the song “There's a Long, Long Trail" which became popular during World War I.