Although No Cure for Alzheimer's To Date,
​There is Hope on the Horizon
​
Interview with
Yuko Hara, Ph.D.
Director of the Alzheimer's Drug Discovery Foundation's Aging and Alzheimer's Prevention Team 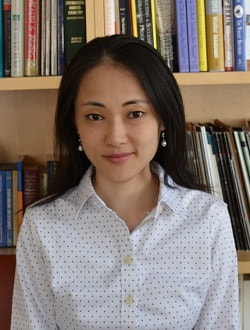 Yuko Hara, Ph.D., is the director of the Alzheimer's Drug Discovery Foundation’s Aging and Alzheimer's Prevention team. In this capacity, she critically evaluates the scientific evidence behind therapies to promote brain health and/or prevent Alzheimer's disease. She also investigates potential risk factors as well as research proposals on prevention therapies. Yuko manages the content and updates for Cognitive Vitality, a program of the ADDF that provides a free resource on brain health that is evidence-based.

Yuko was previously an assistant professor in neuroscience at the Icahn School of Medicine at Mount Sinai, where she remains an adjunct faculty member. Her research focused on brain aging, specifically how estrogens and reproductive aging influence the aging brain’s synapses and mitochondria. She earned a doctorate in neurology and neuroscience at Weill Graduate School of Medical Sciences of Cornell University and a bachelor's degree in biology from Cornell University, with additional study at Keio University in Japan. She has authored numerous peer-reviewed publications, including articles in PNAS and Journal of Neuroscience.
Karen Shan, co-associate editor, asked Yuko about the risk factors, treatment options, and recent clinical drug development for Alzheimer's disease.

Please briefly explain Alzheimer’s disease as well as its risk factors and prevalence.

Alzheimer’s disease is a type of degenerative brain disease that leads to a loss of cognitive functions.

How Alzheimer’s disease affects people depends on the stage of the disease. Early symptoms include difficulty remembering recent events, names or conversations. Later symptoms include impairment in communication, confusion, poor judgment, behavioral changes, and difficulty speaking.
​How is Alzheimer’s Disease treated? As I understand, there’s no cure for it yet, correct?

As with other diseases of aging, such as heart disease, cancer and hypertension, our success in fighting Alzheimer’s disease and related dementias will come from combination therapies, precision medicine and more focused prevention efforts. The ADDF is working to support and accelerate the development of novel drugs and prevention strategies that can stop Alzheimer’s in its tracks.

ADDF’s Statement on Topline Results of Phase 3 Trial of Amyloid-Clearing Drug Lecanemab: “The Alzheimer’s Drug Discovery Foundation (ADDF) is encouraged to see the positive data reported today by Eisai and Biogen for their amyloid-clearing monoclonal antibody lecanemab. According to the companies, lecanemab reduced cognitive decline by 27% compared to placebo and reduced amyloid levels in the brain in the phase 3 CLARITY AD clinical trial.”

What is the focus of research on Alzheimer’s Disease?

The ADDF is focused on the biology of aging as increasing age is the biggest risk factor for Alzheimer’s disease. Amyloid buildup is just one of many biological processes leading to the development and progression of Alzheimer’s. The ADDF funds a diverse research portfolio of drug targets and biomarkers that reflect the many biological pathways and systems involved in Alzheimer’s disease and other dementias, including inflammation, vascular dysfunction, misfolded proteins, metabolic dysfunction, and other mechanisms affected by aging that may contribute to this complex disease. Our portfolio also covers diverse biomarker modalities from neuroimaging to blood tests to digital apps.

​​What advances are being made in terms of treatment, diagnosis and prevention?
In terms of prevention, the landmark Finnish Geriatric Intervention Study to Prevent Cognitive Impairment and Disability (FINGER) clinical trial, led by Dr. Miia Kivipelto, an ADDF board member, reported that a group of lifestyle changes improved cognitive function and memory in older people with APOE4, a genetic risk factor for Alzheimer’s disease. ADDF is supporting Kivipelto’s FINGER 2.0 clinical trial where the same lifestyle interventions are combined with a medication for diabetes to evaluate if the combination intervention has synergistic effects.

What does your role entail as director of the Aging and Alzheimer's Prevention program?

I direct the Aging and Alzheimer’s Prevention program at the ADDF. My team analyzes the scientific evidence of natural products, supplements, drugs, drugs-in-development, and non-pharmacological interventions as they relate to potential benefits for cognitive function and age-related diseases. I manage a portfolio of prevention research programs and seek additional projects to accelerate the discovery and development of effective prevention interventions. I also manage the content and updates for Cognitive Vitality* which provides information on various supplements and commonly prescribed drugs. We discuss the scientific evidence (or lack thereof) of efficacy and safety. The blog on Cognitive Vitality covers the latest scientific news on brain health. Our aim is to accelerate the discovery of drugs to prevent Alzheimer's disease and related dementias.

*Cognitive Vitality is developed and updated by ADDF’s Aging & Alzheimer’s Prevention program, whose mission is to evaluate, communicate, and accelerate the scientific evidence for proposed strategies to prevent brain aging, Alzheimer’s disease, and related dementias. Our team of neuroscientists evaluates and writes about the scientific evidence for and against the safety and efficacy of select food, drinks, vitamins, supplements and drugs. Our goal is to provide unbiased scientific information available to date to improve decision-making by patients, physicians and caregivers.

Have you always had an interest in studying cognitive decline?